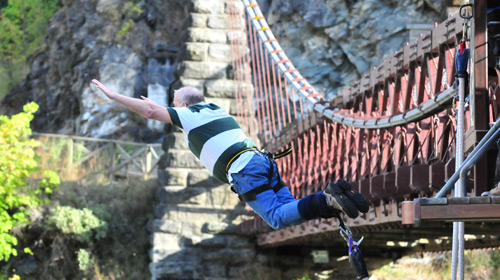 I was exploring the southern island of New Zealand for the first time in March of 2010 when I passed the A.J. Hackett Bungee Jumping operation on the way to Queenstown. This is where the sport was started in 1988. People jump off a perfectly good bridge and fall 141’ toward the Kawarau River when all of a sudden they are caught by a really thick rubber band that keeps them from ending their physical lives.

During the time I was visiting Queenstown (looking for Hobbits and Orks), I thought about going for a jump as I explored this beautiful area of New Zealand. After all, my 58th birthday was a few days away and my children and friends would know for sure that I’m not in my right mind. Four days later as I’m driving out of Queenstown, I had to once again pass the Hackett Visitor Center and I made my mind up to venture in to inquire as to what was involved with bungee jumping. I watched two people in their early 20’s jump off the bridge with ease and nary a scream before making my mind up to go. After paying my money, getting weighed and signing all the release forms, I headed over to the jump off spot. The attendants helped me into the leg harness that connects you to the bungee cord and low and behold, it was time for the 5 second countdown. 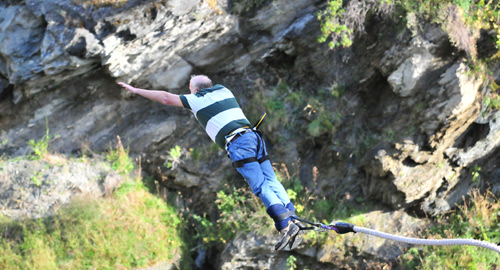 Glancing over to the left at the viewing patio by the Visitor’s Center, I could see an entire bus of Japanese tourists had gathered with cameras clicking to watch me take the leap. I sensed that I could easily be the oldest guy to jump that day. Seeing cameras positioned all over the bridge to capture any moments of terror, my last words to the attendant were, “Don’t make me look fat”. He said, “Throw your arms out and your head back when you jump.” And then he did the countdown.

Five, four, three, two, one, Jump! And with that I was suspended in the air slowly falling toward the fast moving and rather cold river below. After what seemed like a long time, I reached the end of the bungee rope (fortunately it ended before the river started) and began bouncing up and down for quite a while. Once that stopped, I was lowered into the waiting raft and delivered to the side of the river bank where I began my walk up to the Visitor’s Center.

As with anything in life, trust is an important ingredient in anything we do.  After watching the bungee jumping operation for awhile I could tell they put safety first which was my primary concern.  Then it was a matter of trusting myself to not have any fear.  It worked!

I have spent the last fifty years learning about the great mysteries of life from Spirit Guides and Teachers.  I have spent the last twenty five years teaching others those same great mysteries.  Truth has many faces in today’s society especially in the area of Metaphysics.   Truth has many faces and I encourage those on the path of learning spiritual subjects to ask their teachers,  “What is the source of their truth?”

I love the quote from Buddha that says “Believe nothing, no matter where you read it or who has said it, not even if I have said it, unless it agrees with your own reason and your own common sense.”

I have found the purest truth to be that which comes from the Spirit World through various forms of mental and physical mediumship.  Take a look at my website where you’ll find more information about the “Teachings of the Angels” and what I can offer you in the forms of mental mediumship, inspirational speaking and teaching.  Everything is in Divine Order!

It was a fantastic experience and I learned that when you turn 65,
you can jump for free! 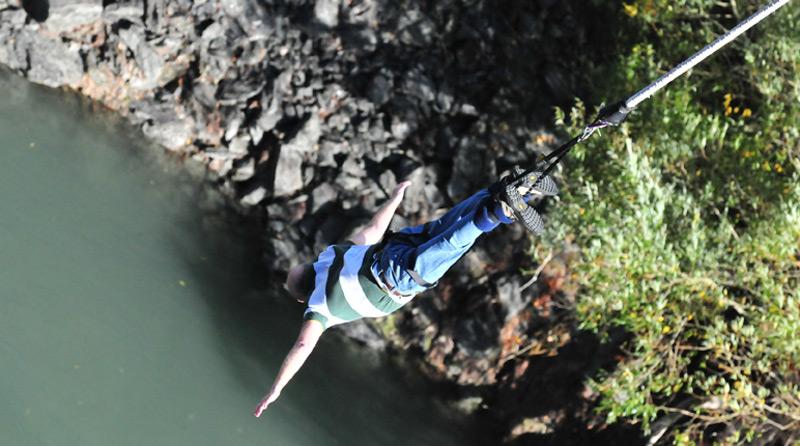